What if you picked up a cup of coffee on your way to work and paid $2.00 in cash, only to have the man behind the counter request your home address?

"Yes," he might reply. "And your full legal name. I'm keeping it in a file for the next 10 years, just in case the government wants it." 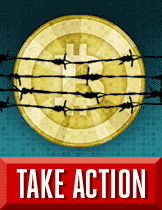 Sound ridiculous? Substitute bitcoins for cash, and that's might happen in the near future at businesses that accept digital currency in New York and elsewhere.

The State of New York has proposed BitLicense, a sprawling regulatory framework that would mandate licenses for a wide range of companies that interact with digital currencies. The proposal creates expensive and vague new obligations for startups and infringes on the privacy rights of both Bitcoin businesses and casual users. And we have only four days before public comments on the proposal close. Speak out now.

This isn't just about Bitcoin. Any future digital currency protocol would be affected, even if it's not being used for financial services. As the proposal is currently drafted, innovators who want to use these protocols for smart contracts, to track digital assets, or for any other purpose would still be affected.

BitLicense extends well beyond the state of New York. The regulations impact any business "involving" New York or a resident of New York, which is pretty much any online service. And the proposal as written wouldn't just affect big digital currency exchanges; it would sweep up software developers and other entrepreneurs designing creative services for the digital currency environment. There are also no carve-outs for academics or security researchers.

What the proposal would do:

Virtual currencies like Bitcoin have the potential to be privacy-protective and censorship-resistant, but the proposal from New York could undermine all of that. Perhaps worst of all, it could stifle a fledgling privacy-enhancing industry before we even know what potential societal benefits may develop.

We have until October 21 to submit comments to the state of New York about their proposal. Please help us educate New York about how BitLicense would affect privacy and innovation. Send in comments today using this suggested text or by emailing dana.syracuse@dfs.ny.gov.