A Rally Against Mass Surveillance 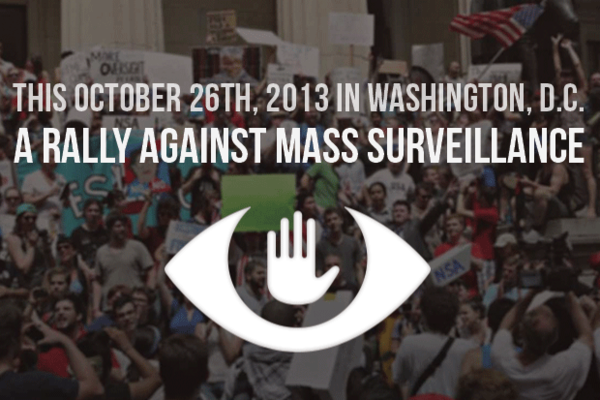 We’re planning a two-day event. Here are the details:

If you are coming from out of town, you should plan to arrive in D.C. on Thursday night so you can join us for trainings on Friday morning. EFF is working with our friends Public Knowledge and other members of the Stop Watching Us coalition to host a lobby day in D.C. on NSA surveillance. On Friday morning, we’ll give you an overview of NSA surveillance, including talking points and handouts, and prepare you to meet with staffers. Then you will meet with key Hill staffers and elected officials to explain your concerns about NSA surveillance.  We’ll be done by midafternoon.

In person meetings are the most effective way for an individual to influence Congress on an issue (except maybe giving them a lot of money).  Even if you've never considered lobbying on an issue, this is a not-to-be-missed opportunity to change America’s stance on surveillance.

The Stop Watching Us coalition is hosting an historic rally in Washington DC on Saturday October 26th – the 12th anniversary of the signing of the Patriot Act.  We’ll be joined by YACHT, the indie pop duo that’s sweeping the nation with its new song, “Party at the NSA.”  With your help, we’re going to create an historic rally for privacy. Will you be there?

Registration on this page is now CLOSED. Please visit Stop Watching Us for more information.

Please help us and let your friends, colleagues and followers know about our page : A Rally Against Mass Surveillance